Pushing the brand out: Absolut "Pillow Fight" ad is spot-on

If you haven't seen the new Absolut TV ad, check it out here and come back.

[Yes, at some point I'll figure out how to embed videos right in the blog. It needs a plugin and I'm having issues with FTP today, if you care... ]

So. It's a good ad, clearly, from a direction/production standpoint. Good timing, funny, unexpected... I would go so far as to say that it is "joyful," which is really rare in ads that are supposed to be funny. Most funny ads are funny because they're just gonzo or weird or poking fun. None of that here. Just... the world's largest pillow fight.

But what transforms it from being just a good ad into a great ad, is that it fits so well with a couple decades of Absolut's print advertising from a brand standpoint.

There are hundreds to look through. One of my favorites is:

Which was the first I'd seen that was related to a person or style as opposed to a flavor or event, like this: 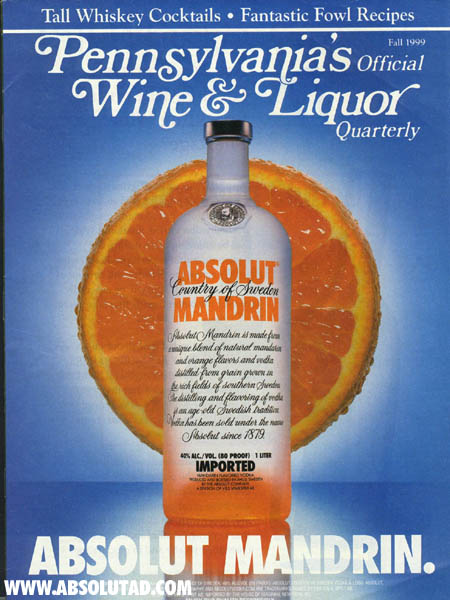 Since then there have been all kinds of ads. But they all feature a theme that visually answers the question, "What would this subject look like around/within the Absolut bottle?" The metaphor (or "gag" if you prefer) takes the outside wold and imposes it on the brand in an artistic, interesting, funny way.

Which is what's so brilliant about the pillow-fight ad. It cinematically answers the question, "What would the world be like if it was seen through the lens of Absolut." It takes a concept that was focused on pulling outside elements into the brand space, and then reverses it -- pushing the brand space out into the world.

This works better, of course, if you know the print campaign, but it's not essential. The words I'd used to describe the TV ad -- funny, fun, creative, interesting, unexpected -- are all ones that work with the print campaign, too. The fact that the print ads are so well known helps, of course. I don't think the ad would have been 1/10th as good if it had turned out to be the exact same spot... but for another brand of booze.

This process illustrates something similar to a creativity tool/exercize I've used with writing students: you take the metaphor of the piece you're working on and flip it, or take a theme and reverse it, and re-write the piece.

For example, if you've written a poem that describes the haunting feeling of deja vu in terms of being followed by a copy of yourself... flip the metaphor. What does it mean to be "followed by yourself?" That could also be a metaphor for paranoia or insecurity, but that's not the point here; we're not trying to re-use a metaphor, but flip it entirely... take the internal and push it out. You might write a poem about how when you closely examine whatever you are doing, it tends to seem like deja vu. Even new events and activities become less interesting if you're forever examining yourself. You never get to do something "fresh" if you're under your own microscope. Then deja vu becomes the metaphor for, "It seems like I've done this before."

See? Fun and new ideas for a piece based on flipping the theme or pushing it out. Absolut could have gone with an easy-peasy (and bad) TV implementation of their print commercials; you can almost picture it, can't you? Patrons around a bar shaped like the bottle... the bottle shape appearing in various locales as people do fun, drink-y stuff. It might have worked... but it would have been shallow.

What they did instead shows a real understanding of the brand on the part of their agency, and some real poetic thinking in terms of the creative.

Ask yourself, when crafting an ad or any kind of creative work, what would the world look like through the lens of this brand? If this product or event or theme were itself the icon of  by which people lived their lives... what would they do?

The TV ad answers the question, "What happens in an Absolut world?" Do that for your stuff.