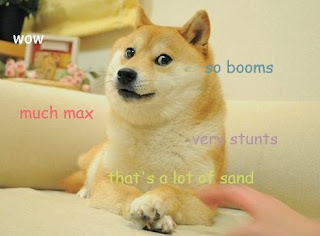 So the title of the post isn't really a pun. I'm not sure what it is. It's there because I can't summon the energy to be clever or interesting about a film which was neither.

Here's where a reviewer has to make sure that you understand that s/he's not a film snob. Because if you don't like an actiony-packed-edy movie like this, that's the first reason people might think. Establishing my b-movie bona fides should only take one sentence for y'all:

I've seen all the "The Fast and the Furious" movies.

I wanted to like this movie. I wanted to love it, actually. I'd heard from a couple people online that it was an amazing, action-packed ride through a post-apocalyptic hellscape. I read one review snippet that said it was "ballsy," one said it would leave you "speechless." One called it "surprisingly tender." As I look on Metacritic, I see that it has an average score of 89/100 and only one neutral review opposed to 42 positive ones.

Which might lead someone to think... did you miss it, Andy? Did you miss the allegories? The metaphor? The deep layers of meaning? The artistic flourishes? The various homages? The culture war references? The mash-ups?

This is where most reviewers won't, but I will, remind you that I'm a poet and have a degree in English Lit.

I didn't miss that stuff. It's just that it's all thrown in so randomly and heavy-handedly that I can't tell if it's meant to be a tapestry of chaos or just chaos. It's energy and craft masquerading as art. It's volume masquerading as depth. It's verbs masquerading as action.

There are a lot of verbs, to be sure. So booms. Very stunts. And much of the film is beautiful and haunting in terms of the cinematography.There is *artistry* in there aplenty, from the stunts to the backdrops to the costume and make-up design. Lots of individual parts where I thought, "That's very nicely done."

But a movie is supposed to have a story. At least one. And characters you care about. Again... at least one. We have no idea why Max is where he is now. I get it, I know. Right. He's the Wanderer. Right. So... We care about him why? He gave up on... what? He has these weird flashbacks to little girls whom he let down and... nothin'. Same for Charlize's character. I get it. She's saving some few of the people whom the bad guy is being Very Bad to.

The audio? There is nothing like dialogue in this movie. The few times there are lines that aren't there for exposition it is almost impossible to hear what they're saying over the ambient booms, bangs and roars and the score, which I found very heavy handed.

I read a lot of sci-fi. I read a lot of weird fiction. I've written some weird fiction and some very weird poetry. I like weird. I like it a lot. And I wanted this to be some kind of super-action-flick-meets-high-art-extravaganza. The trailer gave me goose-bumps.

The movie itself didn't.

I'm sorry. Again... I wanted to love this movie. But while spectacular visuals and action can enhance a good story and decent characters and make an otherwise decent film incredible, they can't fill the void left by no story and flat characters.

Gotta give this one a D+

Because if you go to all that effort on the frosting, the lack of cake seems even more appalling.

A most joyful, terrifying dream

As the son of a shrink, I grew up talking about dreams. I'd come downstairs on a Saturday -- the day I got to sleep long enough to make it through a dream before waking -- and sit with my Dad in his study. He'd stop working on billing or bills and we'd talk about my dream. He was good at providing both a Freudian analysis and "an accurate one," as he'd call it. That is, let's look at the symbolism, but let's also just think about what you're going through. Helpful, insightful and often fun times.

I have had lots of very weird dreams. Years ago my subconscious stopped trying to torture me with monsters and last-minute tests or work assignment and went to unsolvable or a-logical puzzles. Like, "You must arrange these names in numeric order and lay them out in the shape of grass." I'd wake up both stressed out and pissed off that my brain had been able to trick me, again, into getting all worked up.

But I hadn't had a real nightmare in many years. Until a few months ago.

I watch "Mad Men" and love it. I think it's the closest thing to poetry that TV has generated. And because it's about marketing, my field, the metaphors used often apply to my life directly, even if the substance doesn't.

One thing that became clear to me as I watched the first few years of the show was that, on some level, I wanted to be Don Draper. He is a philandering, shallow, self-centered, self-denying, chain-smoking, alcoholic, inveterate liar whose choices have made him deeply unhappy, probably unlovable and, I fear, eventually doomed.

But lawd a' mighty, what a very fine looking man. With a job that is, basically, the dream of anybody in Old School Marketing Town -- the Idea Guy. The guy who is paid to simply Think the New Thing.

And he's good at that. He's not telling tales when it comes to his job... which is thinking of new tales to tell. So, yeah... Of course he's an advertising genius. He's been spinning and branding his life forever. It's deep doo-doo and I love it and, some days, I fear it.

But still... Yeah. Don. Jeez. On some level, I would've loved to have been him.

This was one of those.

In it, I was older than the 48 I am now. It seemed maybe... late 50's. Maybe early 60's. I had thinning hair. Yeah, for those who know me, no... That wasn't the nightmare. I was wearing an expensive three-piece suit and sitting in an opulent, sky-high office. Big office. Great view of some urban metropolis... Maybe NYC, maybe Chicago or Boston. Didn't matter. But it was gorgeous. Floor-to-ceiling windows. Thick, dark red carpet. Huge oak desk.

One wall was covered with pictures of me with famous people in various settings. Clients, friends, vacation buddies, etc. It also had various degrees and awards displayed. And the shelves were likewise filled with trophies and awards and mementos of a very successful career.

In the dream, I knew who I was. The head creative guy at one of the largest advertising agencies in the world. Don Draper + 20 years. I had more money than the Catholic Church. I had entire offices full of people working for me. I had power and influence. I was The Guy You Called When You Needed The Idea That Will Save You.

I was not a bad man. I was not evil. I was not hated by my employees. I was just very, very dedicated to doing my job.

And I knew, in the dream, that that had had (fun to say three times fast) some personal costs. I was in the process of a third divorce. I had pictures of kids from all three marriages on my desk. And I was looking at them when the phone rang.

It was my second wife, with whom I knew I had eventually come to be quite cordial. Her name came up on the Caller ID, and I answered expecting to hear about some event that she wanted me to attend or someone who needed a job or an introduction. We were socially close.

No. She had called to tell us our daughter, who was 22, had killed herself with a drug overdose.

I have never, in any dream, felt the kind of sheer and complete terror/horror and pain as I did at that moment. I felt responsible for her death and my wife's completely numb grief. I couldn't breathe. I looked at the pictures of my kids on the desk and felt like the entire world should end so that I didn't have to feel that way anymore.

I prayed to God that I could go back in time and change something. Whatever that might be. Something that would keep this horrible, painful, shattering thing from happening. Prayed that I could take The Other Path. That I could choose differently and do things differently and be another man that wasn't the man who was about to vomit on the nice, dark red rug.

And then I woke up.

And for about half a second, I thought that my real life was, in fact, the second chance. That I had been that man... that slightly balding, rich, successful, powerful man. And that I had been sent back to do it again. To live a different life. To be... me. Instead of him.

Now I watch "Mad Men" with a lot less angst. Because I know that, no matter how much I might envy Don his chiseled good looks, I will never, ever again envy his fate.