"Kingsman" review: like the Piranha Bros., cheery but violent 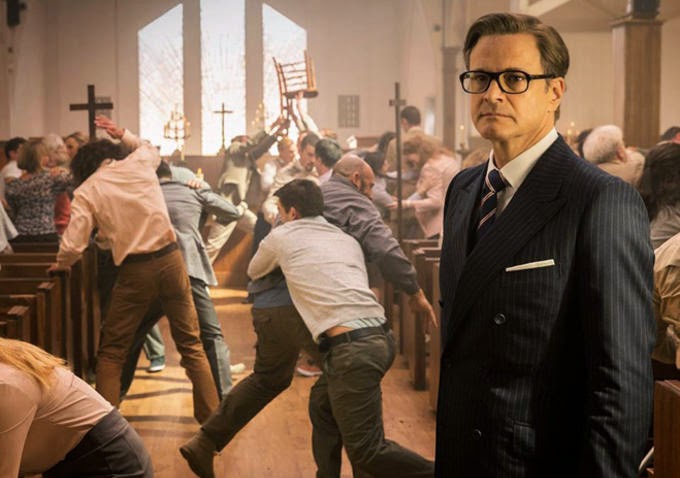 In the Monty Python sketch, "The Piranha Brothers," the eponymous siblings are described as, "A cheery lot. Cheery... but violent." I can't think of a better description of the overall tone of "The Kingsman" than that.

For a movie whose action starts relatively slowly, there ends up being a lot of cheery violence. I mean... a lot a lot. If you are disturbed by the gratuitous deaths of hundreds of bystanders and generally innocent (or at least non-main-villainous) crowds of fellow humans... think twice. If, however, you can take your bloodbaths with a handful of salt, you'll find yourself doing that thing where you laugh and go, "Awww... Garrrg... Blaaahhhh..." at the same time. A kind of laugh-groan-yuck noise where you laugh because it's well done and, frankly, pretty funny but groan because, well... lots of death. And then you feel bad because you're laughing at people getting their blanks blanked off or blanked up or blanked in... and then you feel bad for feeling bad because, really... did you go to this movie thinking it would be a serious treatment of... er... anything.

Warning... mild spoilers coming about some character attributes, but nothing that will spoil the plot. I promise. Because if you don't know the plot, you've never seen a tongue-in-cheek spy movie.

Colin is great. Love seeing him playing, essentially, a classier version of Bond. The ass kickings he hands (foots?) out are the main joy of the film. The main character hunk (don't know him, don't care) did a fine job of jogging through almost every "lower class kid surprises his 'betters' and makes good" trope in the book. Samuel L. Jackson (with an inexplicable lisp) is... just odd. Don't understand the casting, didn't understand his character's motivation (not surprising: it was given 11 seconds), don't understand the reasoning behind his Grand Evil Scheme. He serves his purpose only barely, which is a shame, as I generally love SLJ. His henchman (henchwoman?), Gazelle, played by Sofia Boutella has prosthetics similar to the "Flex-Foot Cheetah" legs but, of course, with blades in them. And while that makes for a neat henchwoman gimmick, it could have been much more interestingly used. Yes, there are a couple good fights where she bounced around on them, weaving a ballet of death. But it seemed like whomever was in charge of Colin's fights got the good writers/choreographers, and she got the 2nd stringers. Similarly, the spy gizmos were somewhat disappointing and all, essentially, warmed-over Bondage items.

The tone is, really, what saves this movie from being average. It doesn't take itself seriously, doesn't expect you to, and -- having given itself (and us) that kind permission -- goes off in its chosen direction with willful abandon. The couple major surprises that are popped on us (that's a pun; come back after you've seen the picture) are fun and inventive and the filming is joyously over-the-top music-video-meets-sam-peckinpah. While there is not a lot of meat on this bone, there is also no fat. Which means... I guess... It's just a bone. Which, as dogs will tell you, makes a fine toy.

I give it a B+ and encourage anyone who can enjoy casual, almost glib and merry buckets of colorful violence to check it out. As said of Douglas Piranha, "When he was young, he was keen on boxing. But when he learned to walk, he took up putting a boot in the groin."

If that sentence makes you smile at all, you'll like "The Kingsman."
Posted by Andy Havens 6 comments:

Risk for two: mad mods for classic board game

A Facebook discussion about the various versions of Risk (LOTR, Star Wars, etc.) and different rulesets about reinforcements reminded me of the insanely modded version of the game I played when I was a kid with my friend, Derek. We did a lot of camping in those days, even in the cold months at either end of the season, and that often meant a few hours inside a camper or tent if it was particularly nasty out. Derek was a couple years older than me and introduced me to both Risk itself, and to the idea that you can play whatever rules you want, as long as everyone agrees ahead of time. I was around 12 or 13, and my brother wasn't quite old enough to enjoy more complex games yet, so Derek and I ended up modding the hell out of Risk, since playing standard rules with two players is both boring and infuriating.

Any of the following rules/mods can be taken alone, or lumped together. Or, of course, altered until unrecognizable from the original.


Probably the most important for making two-player play a bit less unbalanced. After picking your colors, take a third color (we always used black) and assign at least one random territory in each continent as an independent city state. We generally put one each in Australia and S. America, two in N. America, Africa and Europe and three in Asia. Each city state gets 10 units. They are not reinforced unless attacked; after any attack on a city state that doesn't wipe it out, add one unit of partisans. After a player attacks a city state for the first time, it will then get a one die standard attack roll against all adjacent territories in which you have units. If that roll wipes out the last player unit, the territory becomes annexed to the city state with 5 units.

The city state rules make it hard to both attack the human opponent, defend against him/her and try to wipe out a whole continent. When combined with the alternate reinforcement rules below, it makes the game take a LOT LONGER, but allows for some very different strategic planning. Including deliberate pestering of city states near your opponents main areas and deliberately losing to them in order to create new annexes. Heh.


We dumped the regular reinforcement rules even in 3+ person play. Way too much swinging back-and-forth with huge swings based on the cards. Three main changes:


This is a weird one, but we had fun with it. At the beginning of the game, take a 2nd color for your navies. You use the big (x10) pieces as carrier groups and get 3 of them. You use the little ones as destroyers and get 10. They can start on the coast of any territory you have. You can move them once per turn to the coast of an adjacent territory. Carrier groups can transport up to 10 troops each and  can shell adjacent territories based on two-times the number of troops carried. Carrier groups defend, however, as only one unit, plus any destroyers in the same "sea territory." Carrier groups cannot attack other sea units. So while they are powerful, they are vulnerable. You can't have more than 3 carrier groups and 10 destroyers (we defended this idea based on fuel availability, but we were pre-teens, so whatever) at any time, but if they are destroyed, you can trade regular units in any territory adjacent to sea at the rate of 3 units per destroyer and 10 per carrier group. This makes your original carrier groups relatively valuable and encourages irrational expansionism that often comes up short. You're welcome.


At any time you can trade 20 units in one territory for a nuclear missile with defensive strength of zero. There is a three turn count-down, during which if the nuke is destroyed, it goes away. On the third turn after it was created, it can be used to either: a) wipe out all enemy (or city state) units in one territory, anywhere in the world (or all sea units in one sea territory), or; b) halt all enemy reinforcements (offensive and defensive), worldwide, for the next two attacking turns. This was the "EMP" version of the attack, and we thought ourselves very clever.

We tried some rules for air units (fighters and bombers) similar to the navy rule, but that got too complicated... At some point, you can just hang up Risk and play Tactics II or Panzer Blitz or something. We also tried some rules that prevented massive, multi-turn build ups of forces based on the idea that the populace would eventually not like huge standing armies hanging out for multiple years. But that required turn counters and... bleh.

Anyway. I just realized today that I had never chronicled these most excellent mods, and the Internet is where I'm supposed to put this stuff so that the group mind can benefit.