On the 10th anniversary of my dad's death

Today is the 10th anniversary of my dad’s death.

He was born January 21, 1939, so he lived just over 72 years. I think he said to me once something about a good man’s time on earth being an allotted 3-score-and-10, so he hit that mark. You can read his obituary if you’d like, but like most obituaries, it captures a person’s life the same way a train schedule captures the excitement and mystery of a cross-country journey by rail: not at all.

Dad, in fact, loved trains. He wrote a poem about them when he was young; in high school or college, I think. It was called something like, “Roar On! Mighty Engine!” in the mode of Walt Whitman. I read it a couple times when I knew where it was located in his home in Tennessee, but I’m not sure where it is now. Probably with mom in her stuff. It’s not that important to me among the many gifts, both worldly and abstract that he left me. Dad was very much better than me at a lot of things--poetry was not one of  them.

Back to trains... We took three overnight train trips to see mom’s parents in Florida when we were a youngish family. I think the first was when I was eight and the last was when I was 17. We’d take the coach car to Pennsylvania Station and then switch to a sleeper. We had two of those little cabin cars with the wall between them slid back to make one larger (though not large) room. We played games, ate snacks, watched the East Coast slide by and generally had about as much fun as two kids can have at that age. Sleeping on a train, eating on a train, playing Rook in the club car with strangers’ kids, all the while knowing that you’re heading to Florida to go to Disney World and that swamp garden place with the alligators and that other place with the water ski tricks. Yes, I could look up their names, but verisimilitude requires that I write them down as I remember not remembering them.

Dad and I also took a train coach to see my brother at college once in Philadelphia. John was performing in a rock concert and it worked out in our schedules to go down, spend a night, and come back and the train seemed like a fun adventure. It was.

Dad brought a bugle so that, after the concert, while the crowd of college students were applauding for an encore, he could stand up and blow a bugle call to help make it clear that he, too, wanted more.

On that trip we re-captured a bit of the adventure and a lot of nostalgia all at once. I remember that, at the time, I was reading a biography of the explorer Captain Sir Richard Francis Burton and I’d tell dad some of the things about Burton’s much more grand adventures as we had our own more personal, relaxed journey.

I don’t believe I ever saw dad read a book that wasn’t related to his profession or to theology. That was another difference between us. He enjoyed a good sci-fi or fantasy movie... he enjoyed a good movie or TV show of any kind, really. But he was not a “big reader” in the sense of doing so for pleasure. I didn’t realize this until after he passed and I’m glad I didn’t, because I probably would have asked him about it and I don’t know if he would have taken it as a suggestion of a flaw. I wouldn’t have meant it that way, of course. But as an English Major, and writer, reading was obviously core to my entire mental landscape, and I think it might have brought him up a bit short to think too closely on the matter. He did read, as I said, quite a lot of professional, medical texts and he also read a lot of theology. Maybe that would have gotten him over that hump. Or maybe I’m imagining something he wouldn’t have given, as he would have said, “a fat rat’s ass” about.

I’ve had 10 years to think about him like this: in stasis. Where there are no new memories of our time together... except of course there are. Because, as I’ve said many times about memories of important moments and people and places in the past, we don’t remember them the same way we remember phone numbers or what time a show starts or where the remote control is: we visit them. And for the last 10 years I’ve been visiting dad and sharing new thoughts of my own.

Chief among those are my experiences with my own son, Dan, of course.

Dad was a gifted musician who could play almost any instrument by picking it up and “farting around with it” for a half hour. Usually that meant figuring out how to play “Lady of Spain” on it until he was asked to stop, please and thank you. He had a high tenor voice that seemed to come from a much younger man from a much earlier time. He’d used it once on the Ed Sullivan show when he was with the University of Rochester Yellow Jackets. He sang songs around the house that were either sacred or quite ridiculous; camp songs, songs from his days with the Glee Club, songs from old comedy radio shows like Spike Jones or Sid Caesar. Being a singer myself and someone who has had great joy plonking around with a variety of instruments, I always envied his tenor (I’m a baritone/bass) and his easy instrumental ability.

He was also, I think, an actual genius. Like... as people and schools measure those things. I’m fine with where I fall on the smart scale. This isn’t me being unduly modest. Those of you who know me well know I don’t do false modesty. But if I’m smart, he was the next thing. He connected ideas more quickly than I did, remembered concepts (and words in Latin and Greek) from 30 years prior in an instant, and had a facility for new scientific concepts (and dropping the old ones, mostly) that is enviable in anyone who wants to keep current as a physician.

I mention those two things -- his music and his brain -- in relation to Dan because Dan is better at them than I am, too. And while I have no real regrets about my relationship with my father, I do wish the two of them had had more time together. Time as adults, because by watching Dan grow into an adult, I begin to understand my dead father, as an adult, better.

Which, frankly, is odd as hell.

I watch Dan do and learn and say smarter things than I am capable of. And, in his time with the OSU Marching Band, grow into a musician surpassing anything I’d be able to do. All of which is what parents want, of course. For our kids to “do better, be better, be more” than we are or were.

We say, “I don’t care what you do for work or who you marry, or not, I just want you to be happy.” But I’m not sure that’s entirely true. We don’t want our children to be happy if it means they screw over a lot of other people. And we don’t want them to be shallow-happy. Or to require a great sacrifice of ideals. We want their happiness to be framed in a variety of ways that indicate both a good foundation and the ability to make positive changes.

When we were expecting Dan and discussing what fears we had about being parents, the only one Chris and I really had was that, somehow, he would grow up to be unkind. We believed (I still do) that we could deal with a lot of different parental challenges, but being parents to a cruel child -- somehow failing, either through neglect or accident -- to impart the ideals of kindness... that would be something that would have given us real, true sorrow. So far, that hasn’t happened (unless he’s hiding it very well).

And I think it hasn’t happened in my life, either, and I think that if he’d articulated his dreams or plans or fears for me, dad might have said something similar. Because kindness ends up being a stand-in for a lot of other values and goals.

Finances, property, grades, degrees, global climate change, politics... there’s a lot of stuff for parents to worry about on a day-to-day basis. Lots of stones on either side of the “Am I A Good Parent?” scale when you “fart around with it” for a week or month or year. But how do you measure yourself over a generation?

Maybe you only stop and think about it every decade or so, or it’ll make you (as he would have said, as a psychiatrist) “bug fuck crazy.”

So: ten years after his death, while we can’t know what’s in another’s heart, I would have no fear or shame in showing dad mine. Because, as I’ve thought about him while watching Dan go from being a boy to a man, I’ve realized that what I want for my son is what, I think, dad wanted for me: to be kind. Both to others, and to myself.

And as I’ve visited him in memory -- sitting next to him on the train and talking about the fantasy books I wrote (that he probably wouldn’t have read) and Dan’s time in TBDBITL (that he would have loved), I think he’d be pleased with how the Ward Havens journey progresses in that manner.

PS: Maybe he would have listened to the audiobook version. :-) 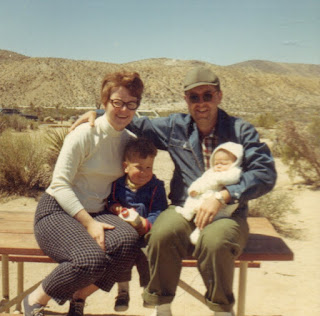